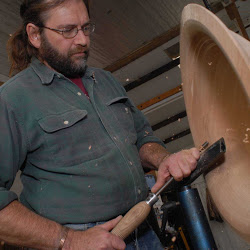 The turning point in my life (sorry no pun intended) came in 1989; relocation to Yorkshire with the firm I was working for as an accountant or redundancy and a new career direction? I choose the latter and with the aid of the Government Employment Training scheme began training with a professional turner. During this period I took second prize for turning in the National Eisteddfod of Wales; first prize went to my tutor!

I began by specialising in high quality turned decorative and functional bowls and individual vessels using simple designs to bring out the natural beauty and variations in colour, texture and figuring of local timbers. As each piece of timber is an unknown quantity before being turned I worked with the wood. A cliché maybe, but it is a relationship that develops between initial ideas for a piece and inspiration drawn from the timber as it reveals itself.

My work is now more an exploration of line and form than an effort at an artistic statement and it continues to amaze me how each minute refinement of a curve can alter the character of a piece. I strive to achieve a perfect form - or at least something a little closer to it than anything I've done before. There is always further to go. This originally evolved to a series of work with hollow vessels based around a vase design with exaggerated rims that are partly removed and shaped. The inspiration for these came from the image of a falling drop of water, hence the Drop Series, with the incising giving each piece a sense of movement. The use of sycamore allows the form to take prominence. This series of work became my trademark work. The Foreign & Commonwealth Office commissioned a piece from this series of work as gifts for the Foreign Ministers attending the Cardiff European Summit in 1998 hosted by the UK as President.

In 2003 I was invited to participate in an eight week residency in Philadelphia, the International Turning Exchange (ITE), working with others selected from the international community to focus on advanced technical innovations, aesthetics and techniques. This experience had a profound affect and changed how I approached my work. Inspiration was drawn from other mediums and disciplines from outside the world of turning leading to more sculptural forms. The use of pale timbers and colouring techniques made the form all the more important rather than how it was produced. Wood is still my choice of material to work with and initially turning the method of creating the form but it is not always obvious. My move in 2005 to a larger studio in Worcestershire has helped this progression in my work with more space and light to aid this creative process. Where the work will go next I do not know but that makes it all the more exciting for me.